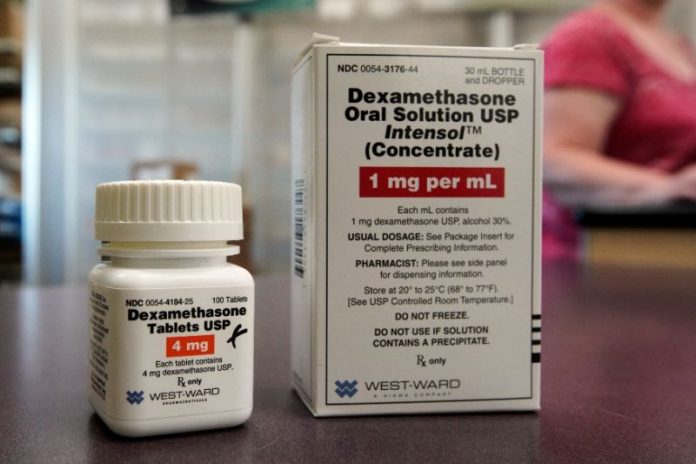 Dexamethasone reduced deaths by 35% in patients who needed treatment with breathing machines and by 20% in those only needing supplemental oxygen, researchers in England said. It did not appear to help less ill patients.

Britain is making dexamethasone available to patients on the country’s National Health Service. The UK Department of Health said the drug had been approved to treat all hospitalized COVID-19 patients requiring oxygen, effective immediately. It said the UK had stockpiled enough to treat 200,000 patients.

“It’s on almost every pharmacy shelf in every hospital, it’s available throughout the world, and it’s very cheap,” said Peter Horby of Oxford University, one of the leaders of the trial that randomly assigned 2,104 patients to get the drug and compared them with 4,321 patients getting only usual care.

Since the virus emerged in China late last year and spread worldwide, there have been more than 8 million confirmed cases and over 440,000 deaths.

The US death toll has exceeded 116,700, according to Johns Hopkins University. That surpasses the number of Americans who died in World War I, when 116,516 were killed — although both tolls are far from precise.

The US has the most confirmed infections and deaths from COVID-19 in the world, and as parts of the economy have reopened in recent weeks, cases have surged in places like Texas, Arizona and Florida, where the virus has sidelined some members of a US team that tracks hurricanes.

For most people, the virus causes mild or moderate symptoms, such as fever and cough. For some, especially older adults and people with existing health problems, it can cause more severe illness, including pneumonia and death.

Countries that appeared to have largely contained the virus are seeing new outbreaks.

In China, authorities locked down a third neighborhood in Beijing to contain an outbreak that has infected more than 100 people. Most of the cases have been linked to the capital’s Xinfadi wholesale food market, and people lined up for massive testing of anyone who had visited in the past two weeks or come in contact with them.

New Zealand, which hadn’t seen a new case in three weeks, was investigating after two women who flew in from London to see a dying parent were allowed to leave quarantine and drive halfway across the country before they were tested and found to be positive.

The reemergence of the virus in the country once praised for how it handled infections raised the specter that international air travel could trigger a fresh wave of contagion just as countries are reopening airports to stimulate tourism.

Best Performers Will Get Recognition at RCPSDC’s Annual Awards 2021

IIFT and PayPal have partnered together to conduct research on ”Digitalization...

Railways to partially resume services from May 12, trains to connect...