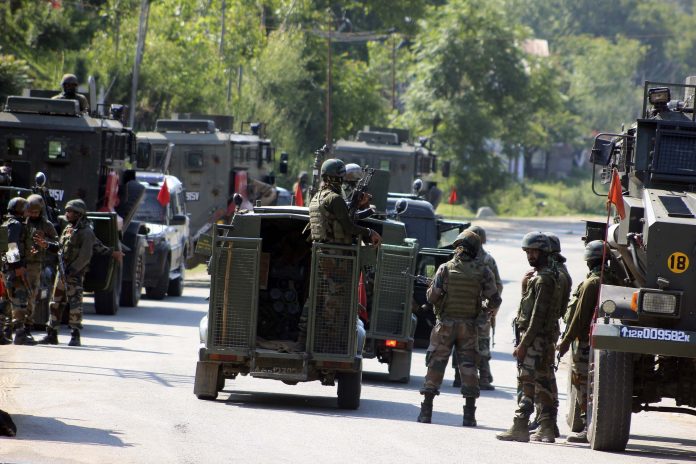 Five security personnel, including a Colonel, a Major and a sub-inspector, and two unidentified militants were killed during an 18-hour anti-militancy operation in north Kashmir’s Handwara area.

The spokesman said the operation was launched after the intelligence inputs were received that terrorists were taking civilian inmates of a house in Changimul village hostage.

Police officials said the operation was called off on Sunday morning after the bodies of the security personnel and the militants were spotted inside the house at the encounter site in Changimul area, nestled in a forest zone.

Army sources said the militants, who were inside a cowshed, were presumed dead on Saturday evening after the exchange of fire stopped for over one hour.

The operation against the militants, who escaped from the Rajwara forests on Friday afternoon, was launched around 3.30 p.m. on Saturday and the security personnel had set up heavy lights in the area to ensure the militants did not escape from the spot, taking advantage of the darkness.

The Army officers and their team went inside the house near the cowshed to “rescue the civilians” but their communication got disconnected with the search-and-operation personnel outside, forcing them to hold fire for the whole night. The operation was also “slowed down” due to heavy rain and thunder in the area, police sources said.

Sources said the officers found themselves in front of the militants, who had sneaked in from the rear side of the house, resulting in a fresh bout of firing at the encounter site.

Sources said the identities and affiliation of the slain militants were being ascertained. “Two weapons and a warlike store was also found at the encounter site,” officials said.

Microsoft bids farewell to all of its iconic Windows games