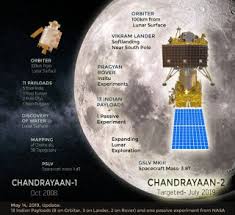 “Chandrayaan-2, with an Indian Lander-Rover (Vikram-Pragyaan) combine, is India’s first step in robotic space exploration and the mission is on the anvil. Obviously, this mission is more intricate,” Radhakrishan, who is now Chairman, Board of Governors, IIT Kanpur, said.

Speaking at the seventh convocation at the Indian Institute of Information Technology Design and Manufacturing (IIITDM), Kancheepuram, he said lunar orbiter Vikram with be orbiting the moon at a speed of around 6,000 kmph and must have the autonomous capability to brake its speed and steer itself for a soft and safe landing in an uncharted terrain of moon, precisely at a designated site.

“Moreover, all these operations would happen within 16 minutes and the landing site also has to be ascertained by itself while on its descent. The entire nation is looking towards it,” Radhakrishnan said.

Radhakrishnan, who became head of the India space agency in 2009 – a year after the first Chandrayaan mission – and held the post till 2014, said that the accomplishments signify India’s capabilities to conceive, design, manufacture and deploy complex and large high technology systems on an end-to-end basis, and the confluence of ISRO and Indian space industry for enhancing capability and capacity.

Pointing out to the opportunities in the space sector, he said: “India is on the threshold of human spaceflight and complex interplanetary exploration which will open up enormous challenges and host of opportunities to the new generation.” India has mastered the complex technologies and achieved self-reliance in access to the outer space, he said, noting that barring few heavy communication satellites, all other Indian satellites were lofted by the Indian launchers.

India has launched close to 300 satellites for 33 countries on a commercial basis, Radhakrishnan said.