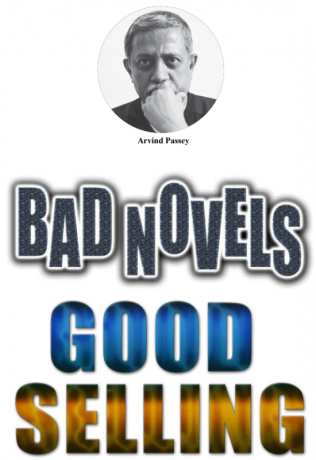 You’ve obviously heard of engineers opting to spend a couple of years in some IIM or a lesser institute and come out brandishing his MBA degree or diploma to finally settle down to selling soaps or thrusting limp shares down the throats of gullible investors or happily being an armchair advisor or as the industry calls them, business consultants. There are a couple of newer streams that the MBA think-tanks all over need to seriously consider… after all, isn’t diversification the surest way to remain in the news, right? It is a lot easier to discover trends these days… I mean, one doesn’t really need to hire Neilson to spend a crore and then make a presentation with obfuscating stats in a starred hotel to just mutter in the end, ‘Writing is big business.’

We know that already. Yes, writing is indeed big business. But selling writing is bigger business simply because our publishers are no longer doing it effectively. Let us first investigate the link between MBA and the art of writing. If you are able to think of just Chetan Bhagat, I’m afraid you really need to polish your author GK. Rashmi Bansal, Amish Tripathi, Yashodhara Lal, Ramchandra Guha, Mallika Sarabhai, Harsha Bhogle, Prasoon Joshi, and Mallika Sarabhai are just a few. There are, in fact, hundreds of them who have decided to exercise their right to write because they think they already know how to market and sell. The tens of names that I have not listed (because come on, dammit, this isn’t a sponsored list and I’m not getting paid) can anyway be found bobbing in that sea called the social media. Surf the waves of Facebook and you’ll soon find them on rafts selling their novel… which is probably a thriller with a lot of banking terminology thrown in to make it sound intelligent enough. This isn’t bad at all… after all weren’t we all anyway being strangled by those authors who made writing complex with all references from the classics thrown in, pretentious sentences saying all that even a sarkari-school-educated reader could have said without sounding pompous, and who moved around only in the company of other wordsmiths muttering something sounding uncannily like what Ifeanyi Enoch Onuoha once wrote: ‘The audacity of my sagacity is instrumentality to my success.’ Enough of this! We needed writers whose writing imitates the simplicity that life is and not those who make it go a step beyond understanding to enter the mumbo-jumbo world of a superior caste called a ‘writer’.

The emerging breed of writers today have promptly dumped everything associated with literature, complex meandering of mundane thoughts in overdone sentence formations… or even grammar, if this makes you grunt with satisfaction. This was obvious as the editorial teams of publishers were anyway busy with trying to write their own novel and had hardly any time to look up from their personal manuscript and read what is sent to them for corrections and suggestions. It is far easier to reject manuscripts that pour in endlessly, pick up some smart plot and begin realigning its genetic code to make it escape the attention of Dr Plagiarist-catcher. The marketing teams of publishing houses are no less… look at them pretending to understand how things happen on Facebook and suavely call themselves influencers. The only problem here is that they reserve all their talent for their own book. Thus the author despite his degrees in engineering and business management, is sent a carton full of his unsold book with a terse note, ‘We told you it wouldn’t sell. Now use the skills you learned at the B-school and see if you can make a living.’ Such writers soon discover that they cannot really muster the courage to re-read their own work… and so it is simpler to invade Facebook-groups with ‘buy this today – discounts don’t last forever – and remember to review it on Amazon’ message updates.

No, I’m not digressing from the topic… the last paragraph was written simply to tell you that the time for the idea of linking business acumen with writing is here and now. This is what is obvious on Facebook, Linkedin, Twitter, and even Instagram. A large percent of authors (and I don’t mean just Indians writing in English) fall in the ‘shamelessly ask for sales’ or shamelessly promote your book every time, all the time’ category. I guess this is because, as I said earlier, the marketing teams in publishing houses are busy doing everything but what they are paid for… and this means that some of them are authors as well. Editors dream of peddling their own book on the social media… and so the books that authors send across are hardly ever edited and reach the reader howling with howlers. Everyone, it appears to me, is writing a book. The world is fast turning into one amorphous lump of authors. And so, just as everyone is forever selling on Quikr and OLX with not many actually buying, we have tumbled into an era where everyone is writing and not any are reading.

Look at the other phenomenon happening on the social media… everyone who thinks he (and a ‘she’ is also included every time I mention ‘he’) can write but cannot sell, is selling the art of creative writing. More than a score of my friends on Facebook are successfully making a living selling one-day creative writing workshops. The better-off graduate to selling their own property in the hills and tout them as ‘havens for writers and poets’ and add value to the deal by throwing in some one-book writer who nobody knows or cares about knowing, as the teacher of creative writing. I thought only the engineering colleges and B-schools were churning out writers of novels but they are being thrown into the system by even these workshop-experts on the social media. So obviously, I don’t suggest B-schools to design a writing or creativity curriculum for future writers… they just need to have a specialisation in selling your own book through the social media. B-schools need to wake up before the social media workshop consultants get a whiff of this idea. If they do, we’ll soon be having our Facebook timelines swamped by updates selling ‘one-day workshops in the art of selling the book that you wrote after attending our workshop on how to write your first novel!’ I’m waiting for them to invade the YouTube space as well soon enough. Hey! This is a really profitable concept… keep adding modules about YouTubing, Instagramming, Periscoping, and even Whatsapping and the earning never stops because apps are anyway going to continue their blitz for a long time.

Does this disgust me? No. I have lived my life in times where everyone is anyway selling something or the other. I wish, though, that someone thought of selling the art of reading. What the world desperately needs is a dedicated set of readers… and now please don’t tell me we already have the masterful Kindle, the humble Kobo, and a line of others including the bumbling Juggernaut reader. I mean the other sort of readers. Readers who step out of cars to pee or those who make rude gestures when they’re angry. You’ve got the drift by now, I suppose. We need readers.

A Career Path Is Also Important With the Placement: Dr. Ramasastry...

AWSITC Champs’ Outstanding Performance in the Biggest Skill Competition of the...

To hail or not to hail a CAB?