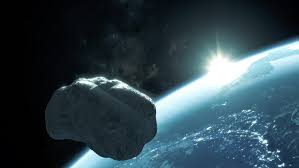 Asteroids – Now-a-days, you must be hearing a lot about the celestial phenomenon. Aren’t you? A large number of asteroids are hovering all around the Earth and we might get hit too sooner or later. An asteroid (Space rock) identified as 1998 HL1 is dangerously approaching close to Earth on October 25, 2019. Yes, you read it right. It is to be noted that an asteroid (space rock) can bring tsunamis, shock waves and flattening winds that could be catastrophic. The space rocks approach towards the Earth due to the gravitational forces that affect them. It is said that one day all life on the Earth will be extinct. Not only life, but the Earth will also extinct someday and an asteroid could be the possible reason. Shocked to hear that? However, a car-sized asteroid slams into the Earth’s atmosphere about once in a year. On the other hand, an asteroid large enough to threaten the existence of life on Earth arrives once in every few million

“The space rock is currently traveling through space at the speed of 25,000 miles per hour and is expected to approach Earth on October 25 at 3:59 AM IST,” Sputnik News quoted CNEOS as saying. In a statement, the CNEOS further said that asteroid 1998 HL1 will be at its closest distance from Earth i.e. 150,000,000 miles away.

According to a report of mashable.com, at its closest approach, the asteroid will near-miss Earth from a distance of approximately 0.04155 astronomical units (au). A single astronomical unit is the same distance as between the Earth to the Sun, which is roughly about roughly 3.9 million miles from the planet’s centre.

1998 HL1 is also classified as an Apollo asteroid. Asteroid 1998 HL1 has a very wide orbit around the Sun and Earth. Asteroid 1998 HL1 was first detected on June 24, 1998, by the LINEAR survey at the Lincoln Laboratory’s Experimental Test Site in Socorro, New Mexico. The last time the asteroid visited Earth’s neighborhood was on June 13. During this time, the asteroid approached the planet from a distance of about 0.37388 astronomical units or around 35 million miles away.

It is to be noted that the asteroid is certainly capable of wiping out an entire city if it collides with Earth. Asteroid 1998 HL1 will come dangerously close to Earth tonight; however, it poses no danger to us.