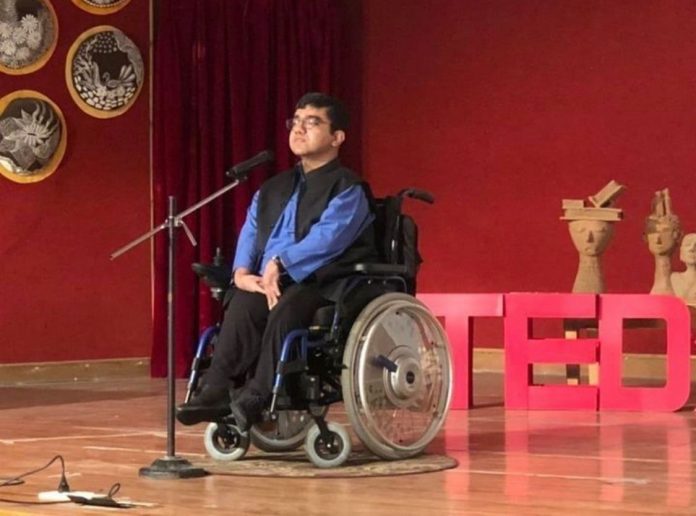 Apeejay Noida alumnus, social entrepreneur and indomitable disability rights activist Nipun Malhotra is the CEO of the Nipman Foundation. At the forefront of efforts to ensure access for the disabled, Malhotra says till states amend building bylaws, our public places will continue to be disabled unfriendly.

When he was giving job interviews while at the Delhi School of Economics, Nipun Malhotra first came across societal prejudices against the physically challenged. “I was doing my post-graduation and when I sat for placements, I discovered the discrimination that people with disabilities faced first-hand. Whenever I entered a job interview, the HR wouldn’t see a country topper who studied Economics at St Stephen’s and Delhi School of Economics but a person on a wheelchair who had come in for an interview. I felt I was labelled and bracketed. That’s what inspired me to start the Nipman Foundation,” says Malhotra.

A champion of rights for the physically challenged, social entrepreneur and disability rights activist Nipun Malhotra is the Co-Founder and CEO of the Nipman Foundation, which works in the areas of health and advocacy for Persons with Disabilities.
An alumnus of Apeejay School, Noida, Nipun, 34, went on to study at other premier educational institutes of the country such as St. Stephen’s College, the Delhi School of Economics and the Indian School of Business.

Born with Arthrogryposis, a rare congenital disorder, he has been at the forefront of numerous efforts to ensure access for the disabled. The wheelchair access filters in restaurant listings on Zomato and the availability of wheelchairs at the NH7 and the Jaipur Literature Festival, are just a few direct results of his efforts. He has also lobbied with the Delhi Government to get the disabled exempted from the Odd-Even car rule. Along with this, Nipun is the founder of ‘Wheels for Life’ (www.wheelsforlife.in) – a crowdsourcing platform with a presence in 25 states, which connects those who need wheelchairs to donors who can financially contribute for them. The executive director of Nipman Fastener Industries has audited the Rajghat, Tihar, Mandoli and Rohini Jails on behalf of the Delhi High Court in 2018 and Jammu and Kashmir High Court, district court, airports and various public buildings in 2019 on behalf of the Honourable Chief Justice of Jammu and Kashmir High Court.

He has also been lobbying with the government for legal recognition of Indian Sign Language as the 23rd language in the Constitution of India and the Central Board of Film Certification for compulsory inclusion of audio description and subtitles in movies to make them accessible for all. Nipun’s PIL in the Supreme Court on the procurement of accessible public transport is turning out to be a game-changer for public transportation across the country.

In an exclusive interview, he discusses among other things, how Apeejay created physical infrastructure for disabled people much before everybody else realised its importance, the barriers that society creates for disabled people, the importance of being proactive and positive in the face of adversity and how his foundation has been sensitising government and India Inc on framing and implementing policies that include people with disabilities. Edited excerpts:

To begin with, tell us about the Nipman Foundation and the kind of work it does?

Nipman Foundation was started in 2012 by my mother and me. It primarily works on advocacy for persons with disability and also focuses on empowering them through employment. Apart from that we have done a lot of accessibility audits and worked on events and festivals to make them accessible, along with making corporate offices accessible and sensitising government officials so that government policies include people with disabilities.

India’s built environment is notoriously disabled un-friendly. How important is it for you and your foundation to alert policy makers about it?

Yeah, an accessible environment is something that is a great leveller for people with disabilities. Accessibility can mean different things for different disabilities. For a wheelchair user like me, it may mean having a ramp and accessible infrastructure. For somebody who is blind and interested in technology, it may mean apps and websites being accessible so that they can be on a level playing field. For the deaf, it could just be access to a sign language interpreter. Accessibility is different for different people in that sense. But what generally prevents inclusion of people with disabilities in society is barriers that society builds up. And one of them is, of course, physical infrastructure. I feel that as long as these barriers are removed, people with disabilities can be as much part of society as anybody else. Removing these barriers is the challenge that we are working on.

Many of our public buildings don’t have ramps. Apart from the Metro there are few accessible means of public transport. What are the advocacy steps that you have taken? Are you working with the government on these?

The Rights of Persons with Disabilities Act, 2016 mandates that any building that comes up has to follow the harmonised guidelines on urban development. It includes various provisions related to accessibility. It is a fantastic document which measures up to global standards in that sense. But unfortunately what has happened is that no state across the political spectrum has changed its building bylaws to accommodate the harmonised guidelines. And I think till the time the building bylaws are not changed, buildings must not be mandated to become accessible to get a completion certificate. That was something that I have really been pushing. The Centre has done its bit in implementing that Act and saying that every building has to put the harmonised guidelines, but till states take the responsibility of amending building bylaws, the problem is going to continue. The sad thing is that there are not even one or two model states which can claim that they have taken the initiative and amended these bylaws that can inspire others.

Please take us through your personal journey and your experience in Apeejay School, Noida.

I joined Apeejay School, Noida in class 4 when my family shifted to Noida from Bombay. The school was wonderful for me since it admitted a student with disability. This was even before the first disabilities act that was the Persons with Disabilities Act in 1995 that legally mandated schools to have people with disabilities. Luckily for me my mom wanted to send me to a normal school against the advice of those who told her that she should send me to a special school. But she thought that eventually I had to face the ‘normal’ world, and to face the normal world the best training is to go to a normal school in that sense.  In Bombay, a school called St Mary’s had admitted me after dozens of schools had rejected me. When we moved in class 4 to Noida, Apeeejay School, Noida, accepted me for what I am. Apeejay School, Noida actually has excellent infrastructure designed to facilitate ease of movement for the physically challenged. It has a ramp that goes up till the top. And the entire school is accessible and has been for a long time. It was way back in 1997 that I joined Apeejay, Noida. At that time, it must have been among a handful of schools in the entire country that was physically accessible in that sense. Not only was it open to putting a disabled student on the rolls, but also the infrastructure was such that one could actually attend classes.

You are an articulate and confident champion of rights of disabled persons. Was it a habit that you perfected while in school?

There were a lot of teachers at Apeejay who encouraged the habit, but a message that I would like to give to persons with disabilities, especially students, is that as a student with a disability, even you need to take a big initiative. Whenever my school used to have a sports day, I used to insist that since I can’t participate in the sports day, why don’t you make me the master of ceremonies? And the school was good enough to accommodate that request of mine.  So, I did develop my public speaking during my days at Apeejay and I even participated in a few plays. I used to insist that some role be assigned to me and the teacher was sporting enough to create a role for me. Overall the faculty in school was excellent and very supportive. I remember the Geography teacher Manjari Ma’am was very encouraging both in class and extra-curriculars. I also remember my Business Studies teacher Sonia Ma’am and Sejpal Ma’am in junior school who were extremely encouraging towards me. I went on to study at St Stephen’s and Delhi School of Economics. My principal at Apeejay at that time, Dr. Rajesh Hassija was extremely accommodating and fantastic. He mentioned Stephen’s and Delhi School of Economics to me in class 11. I did not want to study Maths and it would have been easier for the school for me not to study a difficult subject such as Maths and he called me to his room and said studying Maths would open new doors for you. If he hadn’t said so, I would not have managed to study Economics in graduation and at the post-graduate level because Economics without Maths can’t obviously be pursued.

What inspired you to start the Nipman Foundation?

As far as my foundation is concerned the genesis goes back to the days when I  was studying at the Delhi School of Economics.  When I was doing my post-graduation and when I sat for placements, I discovered the discrimination that people with disabilities faced first-hand. Whenever I entered a job interview, the HR would not see a person who was the country topper in class 12, who studied Economics at St Stephen’s and the Delhi School of Economics but a person on a wheelchair who had come in for an interview. I felt I was labelled and bracketed that way and that is what I wanted to really change, not in employment but in society in general, that’s what inspired me to start Nipman Foundation.

You have been working closely with leading players in India Inc. Do you think corporate India has become more sensitive to the needs of disabled people?

What will be your tips to motivate persons with disabilities?

When it comes to persons with disabilities, it is always important to take the initiative. Go out there and make sure you are living an equal life. Till you don’t treat yourself as an equal to others, society won’t treat you as equal to others. Secondly, people tend to make assumptions about people with disabilities. So, at the school-going age itself, it is important to be open to communication with teachers about what you need. I am sure if you articulate it properly, the school will accommodate it to the extent possible. Be reasonable, also mention what you really want and try to come up with a common solution that works for both the school and you. Parents play an important role, too.   What I am today wouldn’t have been possible without my mother’s contribution who ensured that I went to a normal school.

Exchange Visit of C U Raj to Arunachal Pradesh Under EBSB...

Mozilla would charge $5 for ad-free news subscription in Firefox