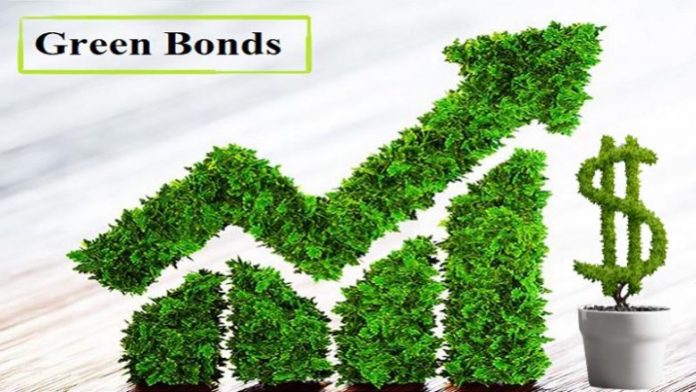 The government is making an aggressive push to a low-carbon economy with an ambitious target of 175 gigawatt (GW) of installed renewable energy (RE) by 2022. The USAID Partnership to Advance Clean Energy – Deployment (PACE-D) Technical Assistance (TA) Program identified Green Bonds as one of the key financial instruments for Indian RE project developers. The Union Budget 2022-23 also emphasized sovereign green bonds and thematic funds for blended finance in areas, including climate action. Key ministries in India such as the Ministry of New and Renewable Energy, Ministry of Power, Ministry of Finance, Ministry of Transport, and Ministry of Urban Development have noted the potential of Green Bonds and actively encouraged major participation from public sector institutions. In May 2017, The Securities and Exchange Board of India (SEBI) issued guidelines for issuing Green Bonds specifying the disclosure requirements. Similarly, the Reserve Bank of India (RBI) has taken several measures to improve foreign investments in bonds as well as deepen the domestic market for bonds.

Research objective : Transition is steadily happening towards low carbon and climate change resilient (LCR) economy in India. However, empirical findings on emerging issues related to the green bond market is currently at the nascent stage. There have been limited researches which examine the financial viability and performance of this market. The research objective of this paper is to analyze Green Bonds from a comprehensive viewpoint related to institutional dynamics that are driving this market at the national level and shaping its adaptive capacity to climate change.

Climate finance in coming years is envisaged to play a crucial role in funding of various adaptation and mitigation efforts around the world. An upcoming and a novel area in climate finance is Green Bonds. The emergence of green/climate bonds took place at the Paris Agreement in 2015, where 188 countries signed up to limit the rising temperature by less than two degrees Celsius and India is one of the countries to sign the agreement.

Various governments across the world have acknowledged the fact that stringent climate change regulations are becoming increasingly necessary. With most of countries stepping up efforts to reduce carbon emissions, the market for Green Bonds is booming. The US is the largest source of green bonds but the European market is also growing very fast with issuance of $300 billion coming up in the next five years.

The emergence of Green Bonds has been recognized by the United Nations as “one of the most significant developments in the financing of low-carbon, climate-resilient investment opportunities. Since 2008, This subject has been brought up at every G20 summit. The bloc in September 2016 called for development of and cross-border investment in local green bond markets.

WHAT ARE GREEN BONDS

The green bond market is the subset of the corporate bond market in any economy. It is like any other fixed income securities (both taxable and exempt) with the only difference that proceeds of such Bonds are “ear-marked” for funding green projects or activities relating to specific environmental or climate sustainability purposes. The market for Green Bonds is growing at a very fast pace and is emerging as a popular means of sourcing capital.

Since these bonds’ appearance in the market, various issuers have differentiated whether their bonds were green and have publicised them accordingly. Recently, however, various countries including China and India have made the green bond market well-regulated with issuance guidelines.

The period between 2007-2012 was dominated with the issuance of Green Bonds by supranational organizations such as the European Investment Bank and the World Bank, along with few government agencies. In 2007, European Investment Bank issued Green Bonds as a structured bond, under the label Climate Awareness Bond with proceeds dedicated to renewable energy. This was followed by World Bank’s green bond issuance in 2008 with maturity of six years for a group of Scandinavian investors. IFC issued a $1 billion benchmark bond in March 2013. Year 2013 witnessed participation from the corporate sector which substantially increased in 2014. This has led to exponential growth in the fresh issuance of Green Bonds.

Total volumes for labelled Green, Social and Sustainability (GSS) bonds, Sustainability-linked bonds (SLB) and Transition bonds reached nearly half a trillion ($496.1 billion) in the first half of 2021. This amount represents 59% year-on-year growth in the GSS market from the equivalent period in 2020. It also sets the labelled sustainable debt market on track to reach another record high by the end of December. Cumulative labelled issuance stood at $2.1 trillion at end of 2021.

Issuance of green debt instruments continued to grow in the first half of 2021, with volumes included in the Climate Bonds Green Bond Database in this period more than doubling to $227.8 billion compared to the COVID-19 impacted end of 2020 ($91.6 billion) – a record for any half[1]year period since market inception in 2007.

At $227.8 billion for the first half of this year, green issuance is more than three[1]quarters (76%) of the full-year 2020 volume of $297 billion. This huge acceleration brings total cumulative green bond volume to $1.3 trillion. Green Bonds have been soaring at a 49% growth rate in the five preceding years before 2021. Empirical findings suggests that the green bond market annual issuance could exceed the $1 trillion mark by 2023. 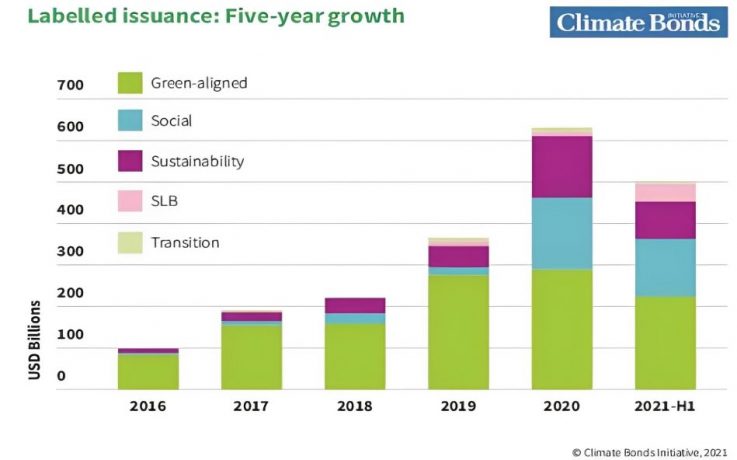 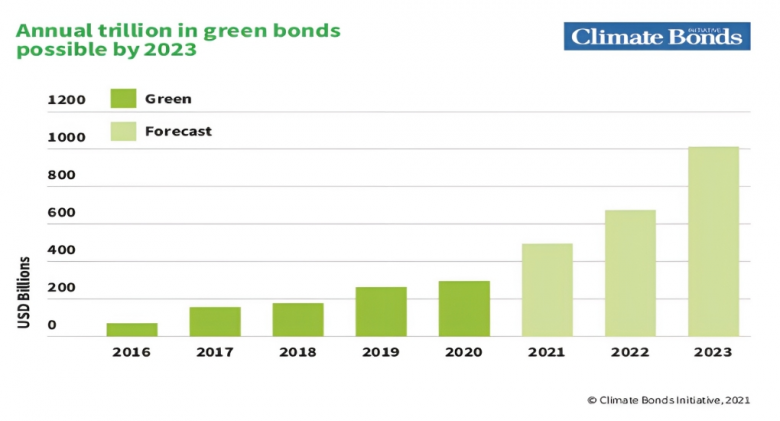 India, also a member of the G20, under the leadership of Prime Minister Narendra Modi, pledged in the COP26 climate summit that India would attain net-zero carbon emissions by 2070.

India’s RE potential is estimated to exceed 3,000 GW, yet currently only a fraction of this amount—32.8 GW, equating to little over 1%—has been harnessed. In this context, massive capital funding is required for the development of the RE sector in India. The Government of India has estimated that $4.5 trillion is needed to meet the country’s ambitious targets for renewable energy and urban sustainability over the next ten years – around $450 million per year.The government has set ambitious renewable energy goals to improve energy access while taking action on climate change.

However, in spite of various financing mechanisms for RE, our country faces various fundamental challenges in the financial market place.

Asset-liability mismatch: This limits project financing tenure to 5-7 years except in cases of institutions such as Indian Renewable Energy Development Agency (IREDA), PTC Financial Services, etc., which have access to lines of credit from multilateral and bilateral agencies with longer tenures.

High interest rates: It is estimated that higher interest rates and inferior terms of debt in India raise the cost of renewable energy by 24-32% compared to similar projects financed in the US or Europe.

Sector limits: With renewable energy categorized under the power sector by the banks, there is an increased competition for RE projects to access capital vis-à-vis thermal power projects. To fuel this ambitious plan, India needs huge investments in form of innovative financing mechanisms for the development of the RE sector in India. The USAID Partnership to Advance Clean Energy – Deployment (PACE-D) Technical Assistance (TA) Program identified Green Bonds as one of the key financial instruments for Indian RE project developers with access to scalable, long-term, low-cost debt capital from institutional investors.

In May 2017, the SEBI issued guidelines for issuing Green Bonds specifying the disclosure requirements. Similarly, the RBI has taken several measures to improve foreign investments in bonds as well as deepen the domestic market for bonds. The Union Budget 2022-23 also emphasized sovereign green bonds and thematic funds for blended finance in areas, including climate action. Key ministries in India such as the Ministry of New and Renewable Energy, Ministry of Power, Ministry of Finance, Ministry of Transport, and Ministry of Urban Development have noted the potential of Green Bonds and actively encouraged major participation from public sector institutions. In September 2015, RBI published guidelines for the issue of INR-denominated (Masala) Bonds. In these guidelines, RBI relaxed the stringent External Commercial Borrowing (ECB) conditions.

India has rapidly evolved as a market for Green Bonds since 2015 for significant investments to support this ambitious strategy. Yes Bank became the first bank in 2015 to raise INR 5 billion through green bond to enhance long[1]term resources for funding infrastructure projects in renewable and clean energy. It was a Rs 1000 crore issue which was oversubscribed. Since then, Indian market for green bonds issuance has grown rapidly from $5 billion in 2017 to $20 billion in 2022. The key features evolving the Indian green bond market can be summarized as under:

The market started with increasing participation by banks since 2015. The shares of corporates are now increasing. In addition to corporates and the government, the World Bank time and again has issued Green Bonds toward several projects in India.

The green bonds issuance in India in 2021 was exceptional and is to set a new record in 2022. India issued $6.11 billion of green bonds in 11 months of 2021. The annual issuance of Indian green bonds could hit $1 trillion in 2023, according to the Climate Bonds Initiative. It could be a big milestone though it’s just a raction of $130 trillion of the global bond market. 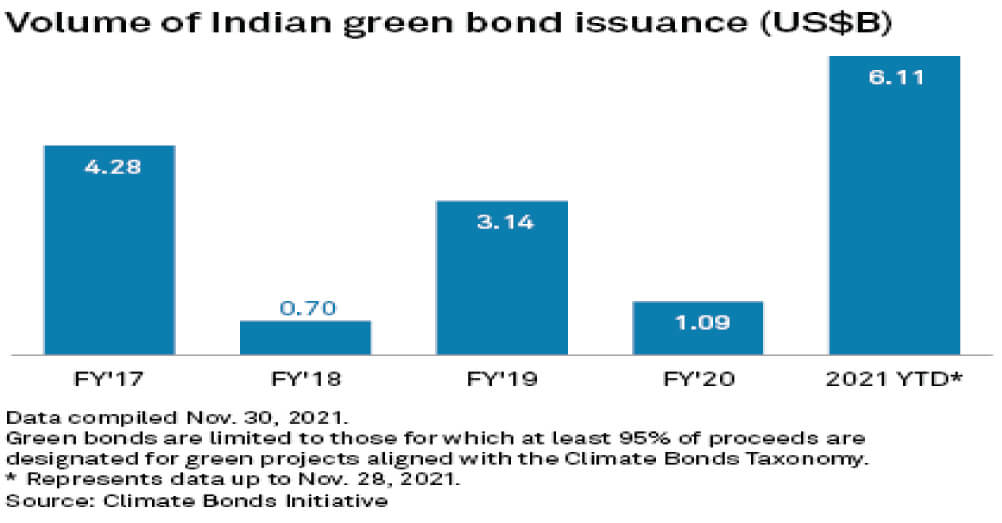 There are few impediments which needs to be addressed to make Green Bonds an attractive alternative. Some of the major challenges in the green bond segment pertain to concerns with regard to disclosures, transparency and end use of funds.

There is lack of uniform and harmonized standards for issuance. Though green bond principles, climate bonds standards and certification schemes do provide credibility, the voluntary nature of these norms is a major concern.

Greenwashing is a major issue where entities make false claims about the projects being eco-friendly.

The cost of issuing Green Bonds as compared to other corporate and government bonds have been relatively high. This can be attributed to asymmetric information, higher risk perception and other governance issues. Empirical findings suggests that maturity-mismatches in green projects and their financing increases the cost of borrowings.

Green Bonds are innovative financial debt instruments charcterized by financing environmentally sustainable projects. Standardization in terms of transparency, independent verification and reporting is highly critical for the development of the green bond market. Green standards recently announced in China and India is a major step forward to inculcate confidence amongst market investors for full participation. However, regulatory authorities have to create uniformity with regard to labelling and certification of Green Bonds. Independent audits have to be made mandatory to bring greater credibility. Monitoring of the utilization of end proceeds and timely reporting of green projects has to made more stringent to check diversion of funds raised by Green Bonds toward non-green activities. A penalty can be imposed on defaulters in case of missing a deadline.