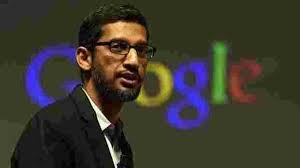 BENGALURU / NEW DELHI: Google declared that it will pump in $10 billion (around Rs 75,000 crore) in India over the next 5-7 years. While named the Digitization Fund, this amount is earmarked for Google’s operational expansion, as well as investments into other companies. The investment follows commitments made by other US tech majors Facebook and Amazon, earlier this year.

“We’ll do this through a mix of equity investments, partnerships, and operational, infrastructure and ecosystem investments,” said Google’s CEO Sundar Pichai through a video address. Its investment is focused in four areas – (i) affordable access to information in local languages; (ii) building new products for India; (III) digitising businesses; and (iv) applying technology and artificial intelligence in health, education and agriculture.

This morning, had an extremely fruitful interaction with @sundarpichai. We spoke on a wide range of subjects, particularly leveraging the power of technology to transform the lives of India’s farmers, youngsters and entrepreneurs. pic.twitter.com/IS9W24zZxs

Pichai had an interaction with Prime Minister Narendra Modi, and Google’s announcement was attended by Union communications and IT Minister Ravi Shankar Prasad and HRD Minister Ramesh Pokhriyal Nishank.

Experts said that such investments are welcome, but should be scrutinised carefully. They also highlight the urgency of enacting the privacy law, given Google and Facebook’s wide-ranging ecosystem reach, data collection efforts, and US-centric data warehousing. “Such investments are welcome but we need data privacy law, data sovereignty law and data residency law. We should be careful that the investment does not increase Google’s digital monopoly in India,” said Mohandas Pai, chairman of Aarin Capital. A recent draft report on regulating anonymized data from a government-appointed committee headed by Infosys co-founder Kris Gopalakrishnan also highlighted the issue of digital monopolies in a market like India.

At the event, Google announced two new partnerships in India. The company has tied up with Prasar Bharati to launch an edutainment series on Doordarshan on how small businesses can adopt digital tools and adapt to coronavirus. It has also partnered with CBSE to train over 1 million teachers in 22,000 schools across India by the end of 2020, to deliver blended learning that combines the classroom approach with online learning, using free tools like G Suite for Education, Google Classroom and YouTube. While serving these constituencies, these efforts will also increase the company’s penetration into the education market.

The US-based search engine giant is looking to double down on adoption of digital services in the country, as more people stay at home following the global Covid-19 pandemic. Recent border tensions with China has led to ban on several popular Chinese apps such as TikTok and has increased scrutiny on investments from that country. This has in turn boosted market interest in Indian startups, which have become more competitive after the limitations on Chinese competition. As India becomes the most important emerging market for US tech companies, Google and other companies are feeling pressure to validate not just business growth, but also value generated for India to ensure their market position.

Google has an advertisement-based revenue model and had clocked revenues of Rs 9,337 crore or $1.23 billion in India in the financial year ending March 2018. Sources said its current revenues are over $2 billion in India, which would make it the largest advertising media company in India. However, Google reported a fall in topline to Rs 4,147 crore or $548 million for year ending March 2019, due to change in accounting standards. At the same time, it has also had run-ins with tax authorities over classifying part of its revenues as cost. Government had introduced a levy on digital advertisement spending, unofficially called ‘Google Tax’, for revenues generated within India, regardless of where it is billed.

The declared investment comes as India has become a key market for Google’s expansion, with over 90% of smartphones using its Android operating system, and its recent aggressive foray into payments, with Google Pay. “Today, 26 million small and medium businesses are discoverable on search and maps, driving connections with more than 150 million users every month. Small merchants across the country are now equipped to accept digital payments,” Pichai added in his address. Pichai also cited the success of Google Pay which recorded 540 million transactions in May on Unified Payments Interface (UPI) and now has the largest market share in terms of both volume and value, alongside its dominant digital advertising business.

There are still concerns around big tech companies’ policies around data-sharing and privacy. With Google’s leading position with Android smartphones, Google search, video with Youtube, internet browsing with Google Chrome, and now payments with Google Pay, Google’s consumer data collection is vast. Meanwhile, Centre for Internet and Society researcher Arindrajit Basu pointed out that the data-sharing terms and conditions, including privacy policies of American companies, though better than Chinese apps, are incomprehensible and open to manipulation. “There is one fundamental difference – at least on paper – between the products developed by Silicon Valley companies and Chinese apps. In the former, there is no blank check obligation to share data with government and intelligence agencies,” he said, adding that US companies’ policies are long, incomprehensible and full of legal jargon that can be manipulated when convenient.

Union Minister Prasad said that Google’s commitment is a big boost to India’s target of becoming $1 trillion digital economy and can help with the initiative of building 1 lakh digital villages. “I will appreciate if Google picks up a good cluster of villages in India in various parts and develop it as a model digital villages of empowerment, skilling, healthcare, telemedicine, distant education and most important, from agriculture to rural empowerment,” said Prasad, while also calling Pichai “a powerful symbol of the creative potential of India’s digital human resource.”