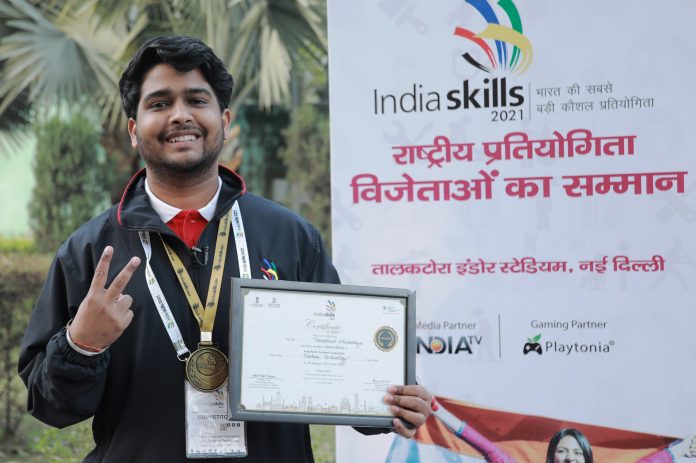 New Delhi: The biggest and most recognised competition for Skills, India Skills Competition 2021, came to end recently at Pragati Maidan with a new journey and Candidates from the Fashion Technology field, who was trained by the Apparel Made Ups and Home Furnishing Sector Skill Council (AMHSSC) also showcased their exemplary talent.

Prashant Chaurasiafrom Rajasthan won the Gold Medal, Devrajyafrom Maharashtra won silver medal and Rinitafrom Bihar and Aparna from Tamil Nadu won bronze medals in the Fashion Technology category of the competition. Bipasha also won the Medal of Excellence. These participants have achieved this position by proving themselves as Skilled Stars of India in the field of Skilling.

This year the competition witnessed contestants participating from 30 States and Union Territories showcasing their skills across 54 Trades (Including 7 New-Age Skills).The competition is organised by the National Skill Development Corporation (NSDC), an apex skill development organisation working under the aegis of the Ministry of Skill Development & Entrepreneurship and is held every two years with the support of respective State governments and the Industry. The Competition is conducted at four levels: the District, State, Regional & National. From each region, 2 candidates based on merit, get selected to compete at the Nationals.

Congratulating all the winners, Roopak Vashistha, CEO & DG forAMH SSC,said that The winners will be provided extensive training by the Apparel, Made-ups & Home Furnishing Sector Skill Council (AMHSSC) & its training partners, in the upcoming months to prepare them for the World Skills Competition 2022 to be held at Shanghai.

“With the current paradigm shift that the world is witnessing due to global pandemic, the acquisition of skills has become very critical for an individual’s personal growth as well as India’s economic growth. India has immense young talent who need an opportunity to build their lives through skill empowerment and showcase their talent through platforms such as the India Skills competition,” he added.

The AMHSSC extends gratitude to all its training partners including NIFT for the constant support they have been providing in taking skilling to higher levels in the country.

How to Find Windows Version, Edition and Build from ISO, DVD...