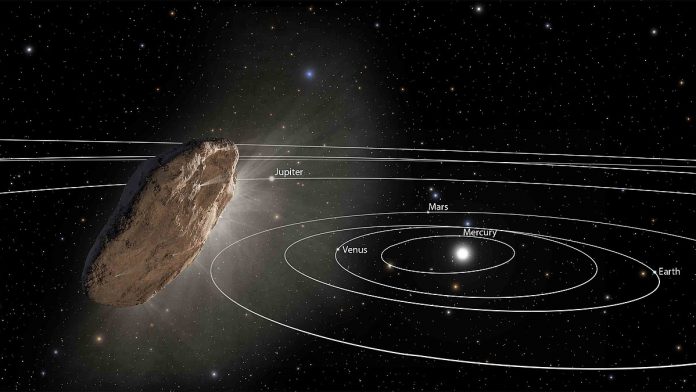 This object was first spotted by amateur astronomer Gennady Borisov in  Ukraine on 30 August. The Minor Planet Centre that is part of the Smithsonian Astrophysical Observatory released a statement where they said that the object, now called C/2019 Q4, has an orbit in the shape of a hyperbola. It is moving too fast to be pulled in by the sun’s gravity, which would mean that it hails from outside our solar system. However, more observations are needed to confirm this theory. If it turns out to be true, then the object will be given a name that starts with 2I (which denotes that it’s the second interstellar object detected)

The first time an interstellar object entered our solar system, astronomers and scientists caught it too late. The asteroid, Oumuamua , was leaving and this left them with very little time to study it.

In an interview with Business insider,  Oliver Hainaut , the astronomer who studied the first asteroid said, “We had to scramble for telescope time,”  Hainaut said. “This time we are ready.”

With this object, it has been detected while still entering the system. This will mean that we will have a lot more time to study it.

Hainaut said, “The main difference from Oumuamua and this one is that we got it a long, long time in advance.”

Plans to study it

An early image of C/2019 Q4 shows that it is followed by a small tail or a halo of dust, which could mean that it is a comet. Comet tails are made up of gas and dust particles and are usually on the opposite side of the sun (Could it not be an exhaust plume from an interstellar engine?).

Since they have time, scientists will study the rock in detail. They are trying to plot the trajectory of the object. This will also help determine if this space rock is of interstellar origin or if it originated within our Solar System.

When they plot the orbit of the object, if it is elliptical, it originated from inside the solar system and it is orbiting around something, maybe our sun.

If it is a hyperbolic orbit, then the object is an outsider. It is on an open-ended trajectory.

Hainaut told Business Insider, “Here we have something that was born around another star and travelling toward us. It’s the next best thing to sending a probe to a different solar system.”

The object will pass Mars and if it is an interstellar object then scientists will be able to study it till it leaves our solar system in 2021.

Railways to partially resume services from May 12, trains to connect...