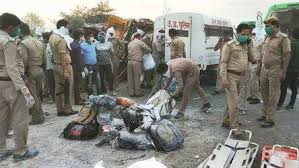 A trailer truck carrying migrants collided with a DCM vehicle in the early hours of Saturday in Auraiya district, police said.

Twenty-four migrant workers were killed and several others injured after a truck they were travelling in collided with a supply lorry near Auraiya in Uttar Pradesh early on Saturday, said police.

District Magistrate Auraiya Abhishek Singh said the incident took place at 3:30 a.m. Many of the 24 migrants who died belonged to Bihar, Jharkhand and West Bengal, he said. Fifteen seriously injured were shifted to the Saifai Medical College in Etawah, he said.

The trailer truck was filled with construction material and was travelling from Bharatpur in Rajasthan towards Gorakhpur.

Jai Narayan Singh, ADG, U.P., said many of the casualties were migrants travelling on the trailer truck. Mr. Singh said it would be investigated how so many people were on the truck.

Chief Minister Yogi Adityanath expressed his condolences to the families of the labourers who lost their lives.

He also directed that all the injured be provided medical care immediately, and the Commissioner and IG Kanpur to visit the site and submit a report on the cause of the accident.

Meanwhile, two station in-charge officers under whose jurisdiction the accident took place have been suspended. The CM also instructed the police to file cases against the owners of the two trucks and seize the vehicles.

An immediate clarification has also been sought from Additional SP and SSP Mathura, and SSP and Additional SP Agra, along with that ADG Agra and IG Agra, said a government spokesperson. Agra and Mathura have borders with Rajasthan.

Samajwadi Party president Akhilesh Yadav announced that his party will provide a compensation of ₹1 lakh each to the kin of the deceased. He also demanded that the BJP government should take moral responsibility and compensate these families with ₹10 lakh each.

Many Countries Take a More Practical Rather Than Theoretical Approach...

Thrust on Online Education by the Government of India – A...